Is it just me or would it be really useful (and cheaper) to have an AES50 stagebox dedicated to line inputs? When you keep collecting synths – which just continues to get easier and easier – you end up with an input requirement that’s hard to fulfil. Stageboxes like the SD16 are cool, but do I really need more mic preamps? Can you imagine how many more inputs you could fit on a box if it was all quarter inch?

Some of this is specific to Ableton Live but it doesn’t have to be.

Then mess around with it finding good combinations of scenes and clips so it starts to sound like a song. Get an idea of how it should play out. Add “performance” effects here – stuff that’s not really targeted at mixing: delays, sweeps, whatever.

Start recording the session to arrangement mode, and run through the performance that’s been developing. Make it longer deliberately so sections can be cut out easily (if you like – maybe there’s no need?)

Possibly add some mixing type effects to the tracks in arrangement mode.

Record each MIDI track in the arrangement to an adjacent audio track, not necessarily with the effects in place.

Once these newly “degraded” tracks are in you’ll probably have to do some lining up, but that’s another of the naturalistic effects we’re after. You might (will) end up with some micro-phasing artefacts which may or may not be interesting.

We all dig some serious bass these days – given that my favourite artists are funkers, house acts, synth wielders in general – I certainly do. But it seems like I’ve been listening to a lot of music that consciously avoids clogging up the bass recently. Even more oddly the artists are conspicuous for their bass deployment: Bootsy, Prince, New Order…

In the case of Bootsy, if you pick almost any Rubber Band track, the low-end is occupied more by the drums – toms and even chunky snares as much as kick – than Bootsy himself. It also leaves a niche for Bernie Worrell to insert his unique lines. Everybody’s favourite funkateer lands above it with the extra high frequencies of the distortion and Mu-Tron sweeps, quite apart from the fact his lines are often clanking around higher frets anyway. That last point is generally agreed to be the defining sound of Joy Division and New Order: Peter Hook’s home territory of the top half of the neck. It still clunks nicely, but it leaves plenty of space for a DMX or acoustic kick – or a deep, pained voice in the former case. And when Prince’s *When Doves Cry* came on the radio in 1984 it stood out a mile – because it’s amazingly crafted pop, but also because it doesn’t sport a bassline at all. The Linn had all that space to work.

Due to a perfectly healthy addiction to *My Name Is Earl* (I discovered it late) I now have a perfectly unhealthy desire to listen to Lynyrd Skynyrd. Frighteningly, they have a cruise! Maybe it’s been going on for a while and I just missed it too…

This is quite a mad one – and yet obvious when you think about it. Pottery from thousands of years ago carries an ambient recording superimposed into the work of the artesan. A Belgian team have managed to extract the recording from a 6,500 year-old South American vase and some 1,000 year-old Latin from another from ancient Pompeii (if my French understanding is to be believed…) Follow the link, check the video. 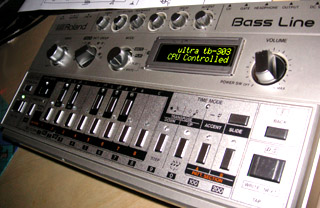 The title says it all… well, no, it doesn’t really, does it?

The ultra303 is an impressive mod for the Bass Line that not only completely replaces the CPU with a new one to add totally new features, but also has a very cool LCD display which looks at once out of place and comfortable on the front panel. The original sound-making part is still used and the new system completely emulates the old one. But it adds MIDI, realtime PC-based editing, a SID emulator to add new sounds, velocity and a whole load of other stuff.

I’m not given to going into Hard Rock Café, but I can’t disagree with this.

The Death of Dynamic Range is an interesting piece about how dynamic range has been progressively more and more mashed in modern music production in the recent years. While this in itself isn’t exactly news, it’s interesting to see the examples and discussion. It’s also interesting to see how the same sound gets maximised quite differently for different formats and/or markets.

The article’s main point is that crushing the dynamic range into (or past) the clipping limit of the medium is destruction of the sound. Of course, it is, but so is using a distortion pedal. That said, it’s not such a “musical” usage of the effect and applying something to the whole mix isn’t the same as applying it to an element to create differentiation in tone colour. Anyway, it’s an interesting page.

There’s nothing like a nice pair of cans, is there? Well, if you’re into it, check out Headph0ne Phet1sh, where “you’ll find all manner of ladies wearing all kinds of headphones”. Headph0ne Phet1sh is pretty impressive for the sheer quantity of content and as they say, “don’t knock it until you’ve tried it”.